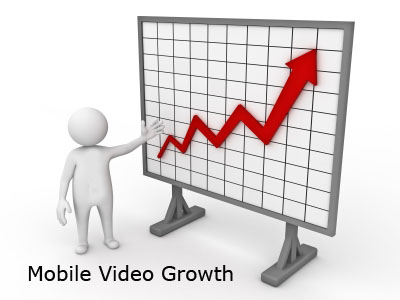 Due to the evolving proficiency of digital media, the involvement of video productions and new media components made an exponential growth every year. There are several prospects why the age of digital media is progressing every year. One of the reasons would be the production of the ever increasing development of mobile phones and portable mini-computers (tablet phones).

As seen above the growth rate of mobile videos is increasing exponentially due also to the growing production of smartphones. The sole purpose of mobile phones a decade ago was to make a link and communicate between individual parties, but due to the surging involvement of the internet, communication can now be global and proven for the convenience of media entertainment as well.

By 2015, US mobile individuals are supposed to consume 327,000 terabytes of mobile data per month, rising in a compound annual rate of growth of greater than 117%, based on Coda Research Consultancy, which released the 87-page report today. As Mobile Crunch suggests signifying a 40-fold surge in data consumption over five-years.

For more years to come the internet will always be a part of the community. Social media, video hosting websites, video sharing, video blogging and lots more is already serving an important role. Developments on several communications are expected, like the progression of mobile internet a.k.a 3G to 4G where communication is now possible everywhere. The possibility of cloud technology is now given possibility and conclusion; you can connect and share everything through the clouds. The outstanding technological innovation is progressing towards the evolution of new media development.

Year 2012, it is expected that the growth will increase much more quickly before it could sum it all up. There are no exact numbers to prove of the growth until the whole year is over to summarize outcomes and make acute assumptions. CES 2012 showcases one of the best gadgets that could be bought this year, on the top list of electronic gadget are smartphones, tablets, followed by Ultrabooks (Upgraded version of a Netbook) and huge OLED televisions. There are other certain improvements in the media processing as well, digital cameras, video recorders and diverse collections of pocket recorders.

This proves that the full involvement of multi-media is upon years more to come. It is expected that media involvement throughout the years has pushed the edge of new evolving technologies. Innovation towards mobile videos will surely be a progressive step yearly.

Hey guys, the INZOMIA team has released there new software. If you are bothered by your stock footage’s, videos, short clips being piled up, or not sorted and you have a hard time finding them on your hard-drive try and download our new Fast Video Cataloger.

Fast Video Cataloger is an innovative local content management system for videos files. It will help you work faster and more efficient with your content and reference. It will help you to communicate better with others involved in the video production process.

← 10 Great Video Project Ideas for Videographer Newbies, Part 2
The Problems of having too many Videos on your Post-production Catalogs →

1 comment for “Short summary of mobile videos growth this 2012”